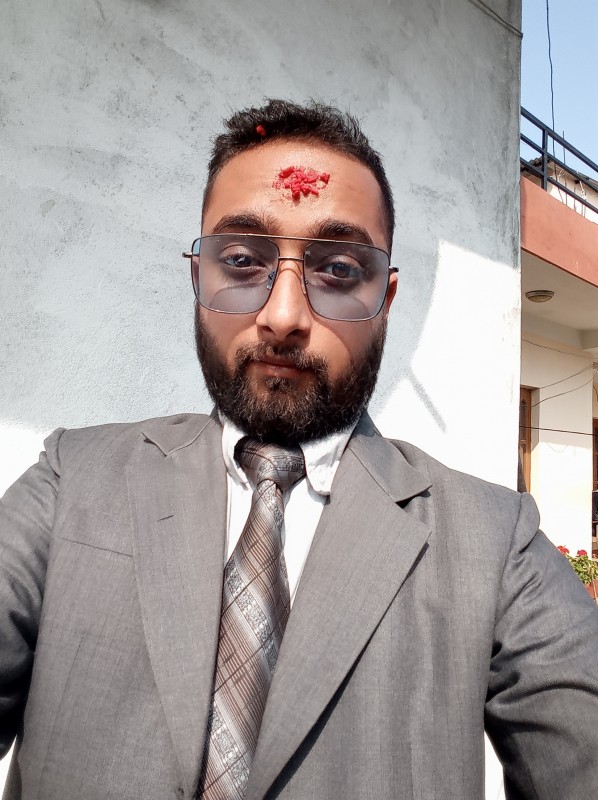 "Rantnapark! Ratnapark! Ratnapark!", the conductor started shouting. The bus driver honked the horn. I felt terribly annoyed as they were disturbing my sleep. I looked at my watch and it was already half past three in the late afternoon. I would reach Ratnapark in five minutes. Apparently, I hadn't booked any room to stay until my flight. I decided to rest at one of the hotels around Sundhara. I hadn't informed my father about my flight then instantly, I took out my phone from the pocket and called him. The phone rang for a while but he didn't answer. I messaged him about my flight being at 11 pm later that night.

"Hey! Chap, where is your mind wandering at?’", the restaurant owner snapped at me. I ceased day dreaming.  I replied, "Nothing". I just gave a vague smile at him. I continued to guard the restaurant with a bitter feeling of ignominy. I stood erect like the Eifel tower for the whole day saluting the high profilers.  My both feet would ache at nights.  I pondered what if I became a lame standing still in the stifling scorching days in Kuwait.

"Wake up! ", My roommate woke me up from the dream. The pendulum showed half past five at daybreak. I was still dozing off. If I had been at home at that moment, I would have been in slumber. You can see the flip side of my life here. Sleep would be barely in inertia in the eyes. I did my daily chores, wore my uniform and walked off to the duty. The dry wind was waiting for me to ruffle my bald head. The sun was waiting for me to blacken my fair skin.

I had done everything for her. There was hardly any grievance.  I thought I was the best hubby in the world.  Alas!  The land beneath my foot slid away. Love had blindfolded me. All of a sudden, she eloped with her lover along with my earnings of the Arab. Woman wobbles when wooed wholly.  I became nonchalant. I could hear an eerie silence hovering over me. Neither I could weep nor could I scream.  I did not want to ooze my feeling out and make it talk of the town.  I buried all of my grief deep inside the grave somewhere in the bottom of the heart.

"Hey Chandra!", my roommate patted behind surprisingly.  I regained consciousness. "Let’s have a lunch", he requested. I wanted to tell hunger did not live in my abdomen now days. I replied, "You can  have yours. I am not hungry now." I again started wondering in my fantasy. I did not bother to wed again. My father and mother brought lots of matchmaking. I averted my heart from such social contract at stake and came seven oceans far to sweat and eat. "Hey, Chap! Where are you lost?", My boss retreated. I thought to reply that I wasn't lost but I did not utter a word and welcomed guests.

That night, Krishna invited me to have some sips. I snubbed down the offer. I said, “No, I do not have mood to get sizzled. You carry on.” He said nothing. He spent all his earnings in liquors. He hardly sent money back home. I again commenced to sink in my own incessant thoughts. "You live a lonely life as you grow old. Your known people seldom count on you. They remember you when they need some help." ,I said to myself. Some of my friends had asked me for some money. I aided them in their hard times. They forgot me when I asked them to return the borrowed money. They even evaded my greetings of New Year on Messenger.

Here is one of the thought provoking articles from Ashirwad Poudel:

If A Primate Would Have To Perceive Human?