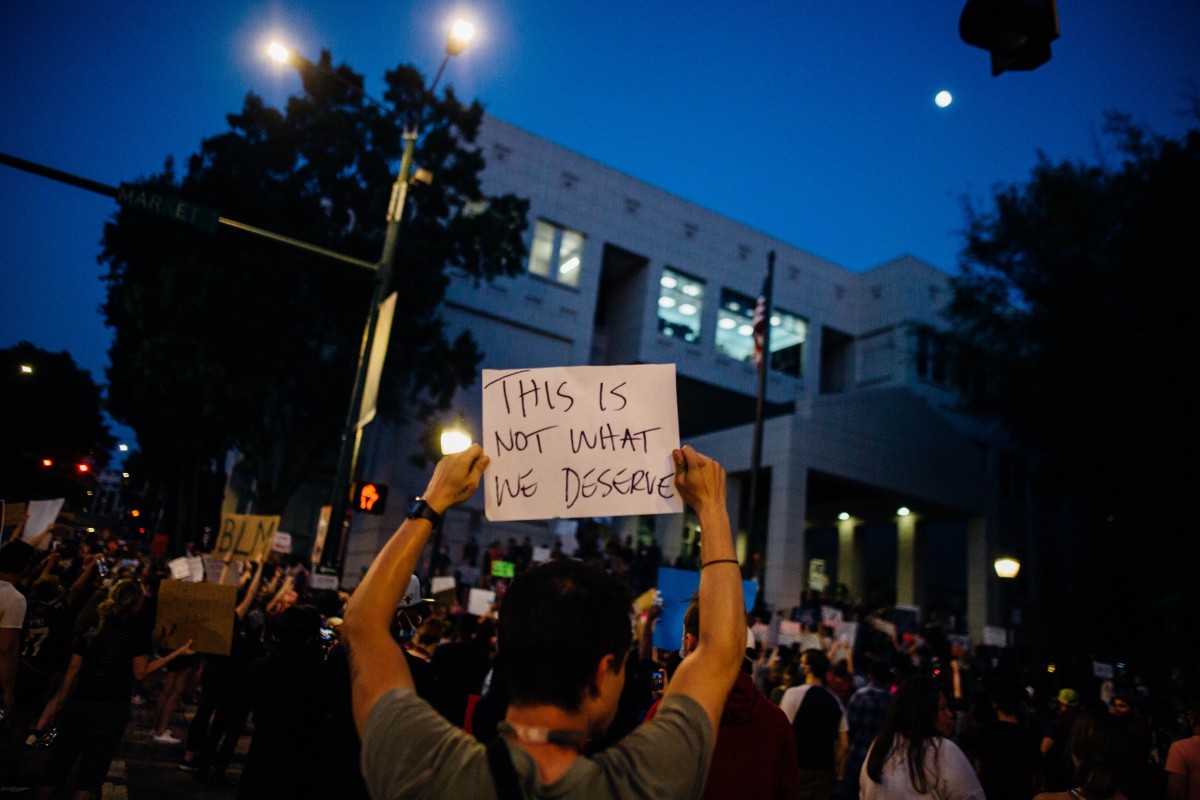 On May 25, 2020, George Floyd, a 46-year-old black man, was killed in Minneapolis, Minnesota, during an arrest for allegedly using a counterfeit bill. As seen in the video that went viral on social media: Derek Chauvin, a white police officer, knelt on Floyd's neck for almost nine minutes while Floyd was handcuffed, lying face down in the street, begging for his life and repeatedly saying "I can't breathe". The second and the third officers further restrained Floyd while the fourth one prevented bystanders from intervening. During the final three minutes Floyd was motionless while Chauvin ignored onlookers' plead to remove his knee until medics told him to.

Recently, a father has opened up about his fears of walking alone as a Black Man, and why he always walks with his daughters, even in his own neighborhood. Last week, Shola Richards, an author and keynote speaker from Los Angeles, California, described his reality as a black man living in America on Facebook. In the post, which has since gone viral, Richards explained that he walks his dog Ace around his neighborhood twice a day, always accompanied by one or both of his daughters. “I know that doesn’t seem noteworthy, but here’s something that I must admit: I would be scared to death to take these walks without my girls and my dog. In fact, in the four years living in my house, I have never taken a walk around my neighborhood alone and probably never will,” Richards wrote. (published in https://www.independent.co.uk/ on 1st June 2020)

(Photo by Josh Hild from Pexels)

The discrimination is not limited to the East or the West, it is worldwide. India’s Muslim minority have experienced increased targeting and violence during Covid-19. Accusations of Muslims deliberately spreading the virus began after two dozen Muslim missionaries at an international gathering in Delhi tested positive with seven of them reportedly died after contracting Covid-19 in March 2020. News channels, such as India Today, ABP News and Republic TV, flashed headlines such as ‘Save the country from Corona Jihad’ and ‘Who is the villain of Nizamuddin?’ while India Today’s anchor, Arvind Goswami, insisted that Muslims are deliberately spreading the virus and as did Sudhir Chaudhary of ZEENEWS. “Accusing Muslims for spreading the contagion is highly a dangerous trend,” says Muqtedar Khan, a professor of Islamic Political Philosophy at the University of Delaware. (Published in https://www.ids.ac.uk/ on 4th June, 2020)

Likewise, on May 31st 2020, 260+ Nigerians were evacuated from China over virus and racism. Nigeria's move has come in reaction to alleged photos, videos showing racism against Nigerians, other black people in China. The development comes amid claims that in many areas of China, especially the southern city of Guangzhou, the Nigerians and Africans in general were being barred from places such as hospitals and shopping malls, forced out of their homes and hotel rooms, and facing violence in the streets. (https://www.aa.com.tr/ writes on May 31st, 2020)

Recently, John Boyega; a British actor and Producer born and raised in London gave a heart wrenching speech in the support of George Floyd, Sandra Bland, Trayvon Martin, Stephen Lawrence and Mark Dagen, the victims of racism. During his speech, he was overwhelmed and cried. He asked the mass to be as peaceful and organized as possible. He said, “It’s very very important that we keep control at this moment. And keep this as peaceful and as organized as possible. They want us to mess up; they want us to be disorganized”.

Discriminations and hate crimes have increased around the world. Why have human become so divided? What could have battered the social harmony? Many of us might think that different demeanors of wars have always been there and it is inevitable and in reality that is the intrinsic characteristic of human being. War has a purpose but these recent cases of discrimination and hate crimes do not seem to have any purpose nor do they yield anything for the oppressor. Karl Marx says, "The history of all hitherto existing society is the history of class struggles." The class struggle has an objective and clear distinction of classes as oppressor and oppressed for certain gain over mode of production and produces. Therefore, it can be predicted that the intrinsic nature of conflict in human being cannot induce the feeling of hatred among races in healthy psychic condition of human. There must have been some other reasons for social harmony to be battered.

Unacknowledged by many of us but sad reality is: there have been massive distortions in human’s psychic conditions around the world by many events planned and executed only to fulfill the wishes of Politics or some Political leaders. The brutal World Wars jeopardized millions of lives and the sentiments and mental wellbeing of billions of families around the world.

World War I is one of the deadliest conflicts in the history with estimated deaths of 9 million combatants and 13 million civilians as a direct result of the war that resulted genocides and the related 1918 influenza pandemic caused another 17–100 million deaths worldwide.

The World War 2 is marked by 70 to 85 million fatalities, most of them were civilians. Tens of millions of people died during the conflict due to genocides (including the Holocaust), premeditated death from starvation, massacres, and diseases.

Cold War, the open yet restricted rivalry that developed after World War II between the United States and the Soviet Union and their respective allies caused many wars around different parts of the world. Wars, wherever be the fort, have always caused severe damage in mental wellbeing of the people around the world.

Researchers around the world have been trying to identify the impact of Wars on mental health. The news of wars in Iraq, Syria and other countries are always horrifying. Some quotations from the media depict the impact of war on mental health: "We are living in a state of constant fear" (in Iraq); "War takes a toll on Iraqi mental health"; "War trauma leaves physical mark"; "War is hell... it has an impact on the people who take part that never heals"; "War is terrible and beyond the understanding and experience of most people"; "A generation has grown up knowing only war". (https://www.ncbi.nlm.nih.gov/ writes)

Wars cause anxiety, depression, impaired functionality, and other mental disorders to directly as well as indirectly involved people around the world. Many reports write. An article published under the title of “The Impact of War: Mental Health of Veterans and Their Families” on September 20, 2013 by Gabriela Acosta writes, Department of Veterans Affairs (VA) details research on some of the ways deployment can distress service members, their spouses and their children. The VA had reported that, by the end of 2008, 1.7 million Americans had served in Iraq and Afghanistan, and 43 percent of active-duty service members had children. They also had predicted that after returning home, those veterans would cope with depression, post-traumatic stress disorder (PTSD), anxiety, traumatic brain injury and other conditions as a result of their service, and those issues would affect not only the service member, but also their spouses, children, extended families and friends.

This give very trivial glimpse about the impact all those deadliest wars might have created in mental wellbeing of human around the world.

Terrorism, Hate Crimes and disruption in Social Harmony have been the consequence of those deadliest wars that took place and cold wars that are still ongoing which also forced the world to be divided into the First, the Second and the Third Worlds.

John Boyega feared “They”. “They” are the ones still believing in racism and hate crimes as their agendas to rule people and have the control over world’s resources. But he believes the time has changed and cries, “Not Today”.

The world is changing into kinder sphere believing in coexistence with all the beings. But the speed of change lies on the shoulders of today’s youth. Youths must identify the leaders who still back discrimination and hate sentiments and act to be good or dear to a/some sect. of race. They are not different than devils if your heart aches looking at the murder of George Floyd.